The Starbucks Rebrand: Making the Siren the Star!

Last week, Starbucks announced that a brand refresh will be taking place beginning in March to coincide with their 40th anniversary. They released a preview of the new logo mark, in which notably absent was the Starbucks name itself. Many huge global brands (ie: Nike, Apple) have dropped their names on their primary logo marks years and years ago… but I couldn’t help but to be proud that the Starbucks brand seems to be all grown up! There’s no question that with over 16,000 stores in 50 countries and an extremely strong brand, people will find the siren mark recognizable enough without the name as part of the logo.

At first, I immediately had a sense of nostalgia for the old mark that’s been on my coffee cup for so many years (although I’m mostly using reusable cups now). But once I studied the new mark a bit more closely, I realized how many changes in addition to the obvious that were made for the better. When comparing the old to the new, the large typography enclosing the siren feels bulky and claustrophobic. The execution of the siren illustration in the old mark feels almost folky compared to the new sleek, refined mark. There is also something refreshing about losing the dark black coloring and utilizing just a simple single color – the iconic Starbucks green. 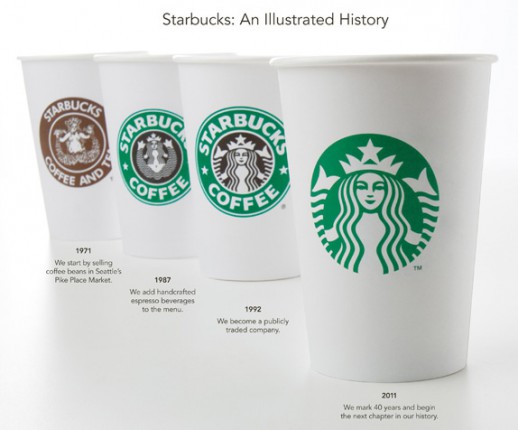 From the start, we wanted to recognize and honor the important equities of the iconic Starbucks logo. So we broke down the four main parts of the mark – color, shape, typeface and the Siren. After hundreds of explorations, we found the answer in simplicity. Removing the words from the mark, bringing in the green, and taking the Siren out of her ring. For forty years she’s represented coffee, and now she is the star.

The details came next. The 20-year old logo was built in the early days of AutoTrace and it showed – points everywhere. We improved composition, brought in more sophisticated stroke width and spacing and a smoother line flow. When it came to her – the Siren – we enhanced her form in subtle ways, smoothing her hair, refining her facial features, weighting the scales on her tail to bring the focus to her face. We enlisted the branding firm of Lippincott to help with these refinements, and give us a better global perspective on the entire identity system.

The result is an evolved logo that celebrates the Siren in a much bolder way – it’s more expressive and energetic and still uses the same vibrant green circle that is so well recognized by our customers around the world.

I can’t imagine the size and scope of a brand refresh of this caliber – all the signage, printed material, packaging, and in-store environments that will need to be refreshed. I am definitely looking forward to seeing how it rolls out in the next few months!