Herb Ritts Getty Exhibition and My Memories as His Photo Assistant

This past weekend we visited the “Herb Ritts: L.A. Style” exhibition at the J. Paul Getty Museum. Through his photography, Herb Ritts displayed an innate ability to use the physical form to tell an emotional story. Utilizing his trademark technique of dramatic light and shadow, the show is a survey of the California aesthetic that Ritts became famous for: fashion and celebrity, elegant human form, beautiful light and classic natural environments.

This impressive collection of medium sized black and white prints showcases some of Ritts’ most famous images and fashion campaigns as well as some never published images. Clean studio backgrounds and classic natural environments like El Mirage Dry Lake Bed and the beaches of Malibu are represented in the classic Ritts vernacular of timeless portraiture and figural body compositions. The unexpected is represented as well, including the portrait of designer Jean Paul Gaultier which obscures his face and shows him shot from behind with the back of his head prominent in a head and shoulders composition. Another unexpected image is Ritts’ portrait of Michael Jordan in complete silhouette, drawing emphasis to the expert physique of an extraordinary athlete in his prime.

I had the opportunity to work as a photo assistant for Herb Ritts in the final year of his career. I was expecting him to have an arsenal of high tech equipment on set but the first day I worked for him we shot portraits of Kevin Spacey with just a single strobe head bounced into an umbrella with no light modification or diffusion, albeit perfectly placed to create an elegant Rembrandt style catch light. Ritts wasn’t bogged down by truckloads of equipment and elaborate technique. He appeared more concerned with composition, gesture and subtle emotion.

His modest 2nd floor studio east of Highland on the corner of Hudson and Santa Monica was surprising in its raw condition. Painted with white walls it was a space that had once been Gene Kelly’s dance studio. It wasn’t overtly interior designed or filled with modern decor. It had a freight elevator and sparse modest furnishings. There was a shelf filled with magazines with small post-it flags protruding out of each one indicating that one of his images were published within. Most memorably there was a window in the office area off Hudson street with a small bullet hole perfectly pierced through the glass pane. I noticed it and asked Herb’s first photo assistant what it was about. He remarked that it was an errant gang-fired bullet that had hit the window, remarking Herb hadn’t replaced the window as he thought it was interesting. It seemed intimidating yet defiant…. It struck the glass, but didn’t shatter its integrity. 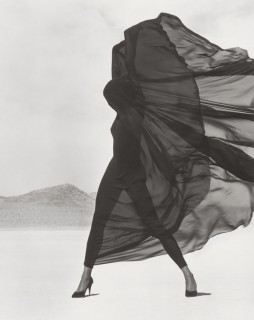