There Are No Original Ideas… In Packaging?

It is not uncommon for clever concepts to be recycled, whether intentionally or not, in a time when most original creative ideas have been taken in some form or another. Artists and designers often speak about taking a cliché and giving it a twist to create something new – that is often what makes a design powerful, as the consumer can quickly recognize something they already know. This idea is even articulated by journalist Barbara Grizzuti Harrison’s famous quote: “There are no original ideas. There are only original people.” 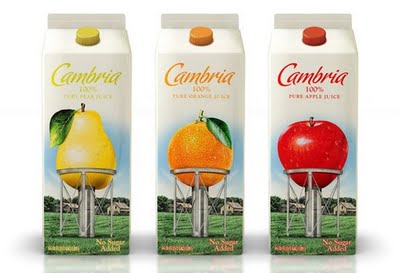 I recently came across a new package design for Cambria Juices and was immediately struck by the uncanny resemblance to the classic Tropicana packaging. The Cambria packaging identity does have a more modern look with a more contemporary logo mark, fresher color palette, and a pop art inspired interpretation of the fruit with the use of exaggerated scale. But what struck me here was the core concept – the oversized juice being depicted on a farm rig, suggesting the juice is so fresh that the user is getting it straight from the fruit. This same core concept is what made the iconic Tropicana “straw in the orange” packaging so beloved by consumers, resulting in the highly publicized debacle earlier this year when the new packaging by the Arnell Group agency was released and quickly switched back to the original when fans vented on social media sites.

I don’t mean to pick on the studio that was responsible for the new design, which was recognized by several prominent design blogs for their work on Cambria. The overall look and feel is clearly unique from Tropicana’s and I actually think the Cambria design is overall much more sophisticated. But the problem here is that Tropicana’s orange-in-straw concept is so iconic in itself that it has become a pictoral logo for the brand over time, making it so ownable that even a reinterpretation can come off as a copy. And I’m not sure of the timing of the release of the two brands, but it could very well be true that Cambria came out with this new design after Tropicana had launched its rebrand. The bottom line is, once an image has become associated with the core of a brand on an emotional level, there is equity there that can’t be ignored.