The Rise of Digital Media in This Year’s Presidential Election

In 2008, President Barack Obama changed politics by not only being the first African-American to become president, but also his use of a new medium in his campaigns: the Internet. His campaigns introduced a new way of reaching supporters, undecided voters, and young voters through YouTube, Twitter, and online crowdsourcing. From then on, politicians have been utilizing digital media to its fullest potential to reach their targeted audience.

Hillary Clinton’s campaign team launched a timeline-style feature on her website called Shuffle. This is in response to Donald Trump’s questions during the primaries and debates over what Clinton has done over the course of her political career. The Shuffle shows 35 examples of what Clinton accomplished on a specified year versus what Trump did that same year. Using this type of approach appeals specifically to people who are Internet-savvy, particularly millennials. It also encourages people to visit the website, and most importantly, engage with the content. 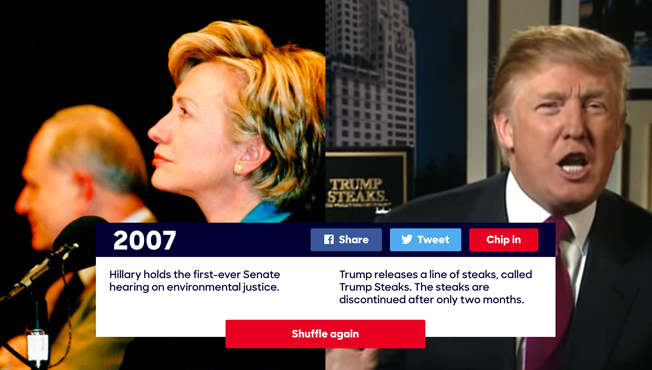 Some of Clinton’s tweets have made headline news over the summer. Trump is an avid Twitter user, sharing most of his opinions and insults on the social app. Clinton and her staff of writers have cleverly strategized tweets aimed to provoke Trump’s antics or debunk his accusations. Clinton’s 3am tweets about national service following Trump’s 3am derogatory tweets about a former beauty queen is a strategy in showing what she finds important in the wee hours of the night versus what Trump finds of importance. She also recently fired off 20 questions to Trump over foreign policy, NATO allies, and other conflicts of interests because of Trump’s international business relationships, following up with fact checks.

In fact, the most retweeted and liked tweet from Clinton is a retort after Trump slammed Obama for endorsing her: 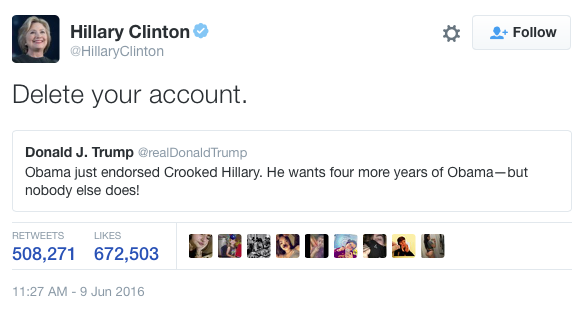 Another tactic in receiving engagement is the Trump Yourself Tool on Clinton’s website. It’s a new Facebook photo filter or meme generator that plasters Trump’s face on profile pictures with insults such as “Fat Pig”, “Dopey”, and other demeaning insults Trump has infamously said on record. It’s a fun, light-hearted tool, but is also a way to gain access to emails and public data data. This type of information helps Clinton’s team gather valuable data, which includes name, gender, location, and age to better target their advertisements and automatically subscribe users to their newsletters.

The one thing Clinton does that stands out from the rest of the candidates is her use of all forms of social media. The two uncommon forms of media for a politician are Snapchat and Pinterest, but yet, Clinton has mastered the two. With over 14,000 followers on Pinterest, she has boards of images indirectly related to the election, as well as displays of strong feminism and her new role as a grandmother. On Snapchat, she posts videos of her husband, as well as events so supporters can get an inside look at what she is doing behind the scenes. These two help humanize Clinton and shows that she’s a mother, wife, grandmother, and woman fighting to be the next President.