Who Knew Mayo Could Be Cool?

Back in June, we posted about Miracle Whip’s new packaging lookand their apparent attempt to capture a broader audience. With the recent launch of their television advertising campaign, it seems to be official: they are now skewing their marketing efforts to target a younger, hipper, and more edgy consumer. Alternative mayo for an alternative market – we get it! 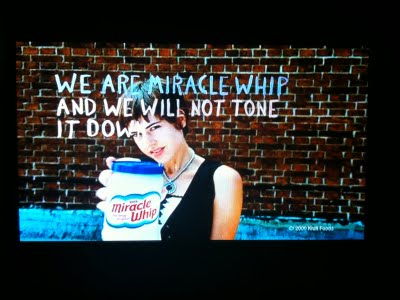 The new ad features hip 20-somethings partying and prepping food in BBQ and other outdoor environments, while a series of defiant statements are read and displayed on the screen ending with the statement: “We are Miracle Whip and we will not tone it down!” The look and feel of the film is saturated and stylized, the editing intentionally choppy, and the graphics are grungy – which makes for an effective formula to communicate youthful attitude.

Who knew that alternative mayo could be so cool?